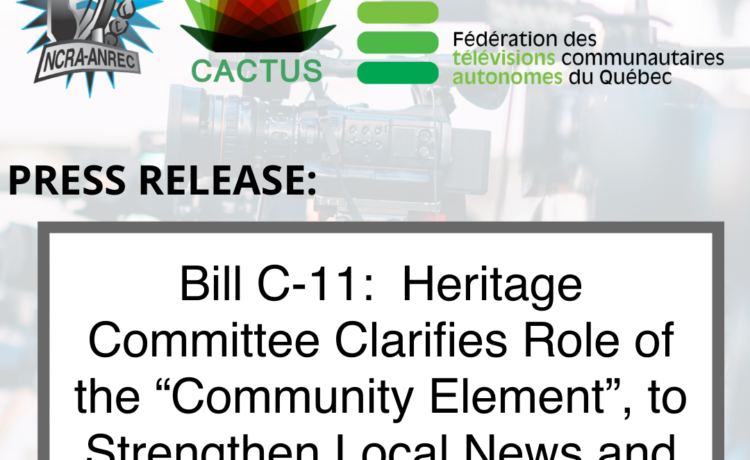 Ottawa (June 23, 2022)—Changes to bill C-11 that clarify the role of the “community element” will lead to more local news and diversity in Canadian media, according to Canada’s community radio and TV stations.  The Canadian Association of Community Television Users and Stations (CACTUS), the Fédération des télévisions communautaires autonomes du Québec (the Federation), and the National Campus and Community Radio Association (the NCRA/ANREC), are pleased that all amendments concerning the community element in the broadcasting system that were proposed to MPs on the Standing Committee on Canadian Heritage regarding Bill C-11 were adopted. The 1991 Broadcasting Act made only one mention of the “community element” and provided neither a legal definition for it nor any description of its role, despite stipulating that the three elements (public, private and community) should work together in an “appropriate” manner toward fulfilling the goals of the act.

The associations were unanimous in their message to the Heritage Committee that the sector could better fulfill its role in assuring a voice for smaller, remote, and minority communities if its role were clear in the legislation. The NCRA/ANREC’s Executive Director, Barry Rooke, said, “The community element consists of nearly 300 CRTC-licensed not-for-profit and community-owned radio, TV and multimedia production facilities. These organizations play a vital role in serving rural communities and minorities in urban areas that the public and private sectors can’t reach. Everyone acknowledges the crisis in local news and information, yet the huge potential of the community sector to fill this gap—due to its lower cost structure and involvement by community stakeholders—has been neither understood nor acknowledged, until now.”

Cathy Edwards, the Executive Director of CACTUS elaborated, “The new language in Bill C-11 should be a game-changer. Community TV has been in decline for two decades. The vast majority of the over 300 cable community stations that used to serve Canada’s smaller communities have closed. Communities are setting up their own not-for-profit media to fill the gap, but there needs to be recognition of the strength of the not-for-profit, community-run model to address the information needs of rural areas and minority voices, especially racialized and Indigenous communities. The language added by the Heritage Committee in Bill C-11 provides this recognition for the first time.”

Amelie Hinse of the Federation noted, “Support for additional clarity regarding the role of the community element was unanimous, from MPs of all parties. Having the adequate democratic infrastructure to support credible local news and information is of concern to everyone.”

We look forward to working with the Canadian Senate to build on the good work of the Heritage Committee.